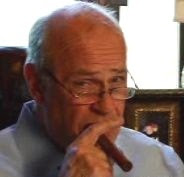 In today's Tennessean, columnist Larry Daughtrey -- who may well be the paper's only redeeming feature -- addresses Fred Thompson's famously missing work ethic. Thompson was evidently tagged as lazy even in his high school days! Maybe that's why the slacker party loves him so.

And how many laws does Thompson break by sucking on his Cuban cigars? Guess we'll find out if or when the Law and Order guy actually enters the race.

An excerpt from Daughtrey's column:

Oh, to be in the somewhat sizable shoes of Fred Dalton Thompson.

Ol' Freddie, or Moose, as they remember him in Lawrenceburg, has stumbled yet again into a memorable acting role. This one is about how to run for president by not running for president.

Fred has got that supposedly all-powerful world of the bloggers, at least those of the neo-conservative persuasion, all atwitter by, well, not doing anything at all. It is a role for which he is perfectly suited.

In the Washington world of workaholics, Fred is remembered as a virtual teetotaler. During his eight years in the U.S. Senate, an insertion into the Congressional Record amounted to heavy lifting.

His high school yearbook sized him up early: "The lazier a man is, the more he plans to do tomorrow."

Maybe Fred will get around to running for president. Maybe not. But by not running, he is running as high as second in some polls of a less-than-overwhelming field of Republicans. Some Republicans believe he is Ronald Reagan, arisen.

Sliding back and forth between the fantasy worlds of the silver screen and politics is nothing new for him. Back in 1992, the Gucci loafers, Lincoln Continental and high-dollar lobbying fees of Fred D. Thompson, Esquire, weren't playing too well at the political box office in Tennessee. So, he bought an old red pickup and a pair of $100 boots, tuned up the drawl and beat a Harvard man for the Senate in Big Orange country.