TN Lawmaker Wants State to Call a Fetus a Person 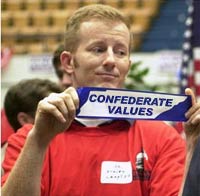 Remember Stacey "Black Caucus is More Racist than the KKK" Campfield? Well, the looney Republican lawmaker is at it again.

Campfield -- the blogging legislator -- has a little bill that would require the state to issue death certificates for every abortion performed in this state.

Never mind little things like logic, or the real world tradition of issuing death certificates to beings who actually have something called birth certificates!

Obviously, this is another one of those cute little right-wing ploys to establish a legal precedent for overturning Roe v. Wade. According to right-wing fairy tale thinking, if a never-born fetus has a death certificate, then . . . voila! . . . a never-born fetus was once-upon-a-time a person, or the equivalent of a real born-alive person. Cuz the state says so.

Can state-mandated and state-enforced fetus support payments for 'persons residing in the womb' be far behind?

More on this later, but note that Senator Herron also has an abortion bill, one of those 24 hour waiting period abortion bills. Cuz Tennessee women are too dumb to think unless the state mandates it.

Find the contact info for the Tennessee Womb Regulators here.

What they're saying:
Jesus General: Remembering Our Embryo-American Heroes
Tiny Cat Pants: Stace, Shall I Send My Used Tampons to You or to the Medical Examiner?
Media Girl: What next? Ejaculation certificates?
Nashville Is Talking: What A Joke
Thoughts of Average Woman: Documenting the Atrocities
Women's Health News: Tennessee Representative Proposes Death Certificates for Abortion