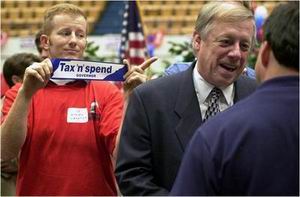 But it is freaking amazing how much world-wide attention one little wingnutty yahoo of a legislator can get. As far as I can tell, this jokster of a legislator has never ever gotten a single bill passed. Yet all Stacy X has to do is propose a looney bill, and the whole freakin’ world sits up and takes notice!

And people complain about the media giving wack jobs like Bill Donohue a forum.

Let me say it again. Rep. Stacey Campfield is a joke. Nothing he does or says should be taken seriously. Can you hear me, New York Times? International Herald Tribune, France? Guardian.UK?

The only thing Tennessee's attention-starved joke of a legislator is good at is getting massive amounts of bad press for this state.

Several days ago, I was mucking around the legislature's website and found Campfield's proposal to require death certificates for abortions. I posted the story as the joke that it is. The General thought it was a great joke. And much of the Tennessee blogosphere has since treated it as a joke. But it didn't take long before the national blogosphere and the msm picked up the story and treated it with some serious wide-eyed horror. And, yes, the story serves as yet more 'proof' that Tennessee is a backward state full of uneducated yahoos.

Why doesn’t the state of Tennessee just put Campfield on salary as the state’s Anti-PR man?

Let’s be clear: There is no way in hades that this absurdity of a bill stands a chance of becoming law.

In the view of House Judiciary Chairman Rob Briley (D), Campfield’s death certificate proposal is “'the most preposterous bill I’ve seen' in an eight-year legislative career. 'It is totally inconsistent with everything the law contemplates as it relates to anything close to that subject.'"

Stacey Campfield is a joke -- let’s count the ways:

1. Campfield is known for making stuff up; he can’t tell a fact from a right-wing fantasy

Campfield also falsely claims that his joke of a bill would result in the collection of needed data, i.e., the number of abortions performed in this state. It's no surprise that Stacey X doesn't know that this data is already collected, and the information is readily available from many sources.

2. Campfield can’t get a bill passed

Campfield is now in his second term, yet I can find no evidence that he has ever gotten a bill of his own passed. He has signed on as co-sponsor to bills which have passed, he has gotten resolutions passed, and that's it!

3. Campfield has the maturity of a 12 year old

Campfield was once kicked out of a political fundraising event for heckling and invading the personal space of the Democratic candidate for governor. That's Stace heckling Phil Bredesen in the photo above. That would be, uhm, Governor Phil Bredesen. (See explanatory note at end.)

4. Campfield is an uneducated yahoo

5. Campfield is an obnoxious jackass

The last time Campfield received this much media coverage was when the Tennessee Representative opined that the legislature's Democratic Black Caucus was more racist than the KKK because they wouldn't let Stacey’s white Republican ass join the Black Democratic Caucus. The story landed in the Washington Post, and was an especially big hit across the pond where everybody already 'knew' that Tennessee is the land of obnoxious uneducated yahoos.

It was Stacey’s desire to join the Black Caucus, or his desire to be black, that earned him the nickname of Stacey X.

Another one of Stace’s brilliant ideas that will also go nowhere is the proposal to replace the state’s regressive tax on food with a tax on pornography. We’re not sure which state employees would get the unpleasant job of reviewing the taxable pornography here in the Bible Belt, but maybe Stacey X dreams of volunteering.

And then there's Stacey X's blog, especially the archives.

Photo: Stacey Campfield, left, holds up a bumper sticker heckling then-gubernatorial candidate [now Governor] Phil Bredesen as he greets guests arriving for the barbeque hosted by Republican U.S. Rep. Jimmy Duncan at the Civic Colliseum in 2002. Campfield was later thrown out of the event.

Here you go folks, here's a tiny fraction of the blogswarm created by one crazy go-nowhere idea from an irresponsible attention-starved jackass who is actually getting paid for his antics: