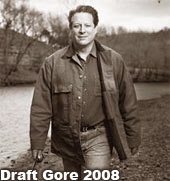 Al Gore responds more patiently than I would to the hysterical headlines on Drudge and other assorted rightwing screaming drama-queen blogs. And note that Gore's response was immediate and reached even Nashville's normally clueless major daily paper, immediately.

Hmmm, Gore has a rapid response team? Be still my hopeful heart.

1) Gore’s family has taken numerous steps to reduce the carbon footprint of their private residence, including signing up for 100 percent green power through Green Power Switch, installing solar panels, and using compact fluorescent bulbs and other energy saving technology.

2) Gore has had a consistent position of purchasing carbon offsets to offset the family’s carbon footprint — a concept the right-wing fails to understand. Gore’s office explains:

What Mr. Gore has asked is that every family calculate their carbon footprint and try to reduce it as much as possible. Once they have done so, he then advocates that they purchase offsets, as the Gore’s do, to bring their footprint down to zero.

The Tennessean elaborates, "Gore purchased 108 blocks of 'green power' for at least each of the last three months, according to a summary of bills from Nashville Electric Service. . . The green power purchased by Gore in those three months is equivalent to recycling 2.48 million aluminum cans, or recycling 286,092 pounds of newspaper, according to comparison figures on the utility's Web site."

See Think Progress for yet more examples of Drudge getting it all wrong.

About that local rightwing non-think tank . . .

Dave Johnson and James Boyce over at Huffington Post report on The Tennessee Center For Policy Research.

And lo and behold we have not only an Exxon connection, but the Bush and Cheney 'mexed missages' manufacturer itself -- the radical right-wing American Enterprise Institute:

They are part of the right's State Policy Network. According to PFAW,

As of Feb. 16, the Tennessee tax dept. considers them "not a legitimate organization" because of their misrepresenting themselves involving questions about the group's opposition to a state crackdown on drug dealers.

The Tennessee Center for Policy Research bills itself as, um, nonpartisan.

via memeorandum
Photo via Draft Gore 2008