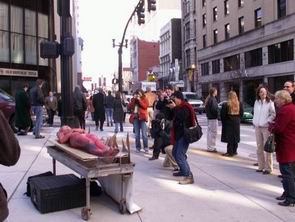 PETA was in downtown Nashville today. The pictures here are from their anti-meat demonstration held at 4th and Church. The naked woman on the barbeque grill is a PETA intern.

On hand was organizer Mike Brazell from PETA headquarters, as well as someone from PETA's Canadian headquarters, I only have her first name, Tanya. There were also some local PETA folks. According to the demonstrators, everyone was remarkably polite, including those who would not take their pamphlets. There was an absence of the jeers and rude behavior they are accustomed to. It looked like all the local media outlets were on hand. 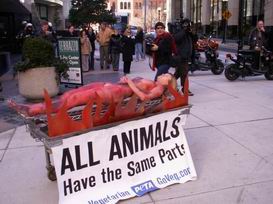 As always PETA aims to shock (disclosure: vegetarian here), and all too often they employ what many deem to be sexism as their primary tactic. Consequently, PETA has alienated many feminists. 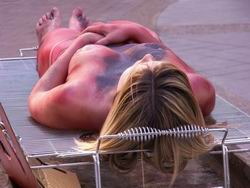 On the other hand, my feminist friends who are involved with PETA argue that if you want to get people's attention in this culture, nothing works like nude women.

"The animals you eat are not those who devour others; you do not eat the carnivorous beasts, you take them as your pattern. You only hunger after sweet and gentle creatures who harm no one, which follow you, serve you, and are devoured by you as the reward of their service." -- John Jacques Rousseau