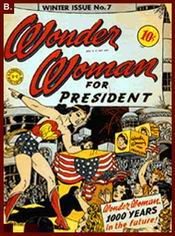 [MANCHESTER, N.H.]- So the question of the moment is: Which would be a greater handicap in a presidential bid, gender or race?

The answer will depend, of course, on how manly the woman, and how white the black.

Hillary Rodham Clinton and Barack Hussein Obama both straddle two worlds, trying to profit from both.

Despite her desire to seem far more experienced than her rival, Hillary’s role in high-level politics has been mostly that of a spouse — a first lady who felt that she got elected too. The Yale-trained lawyer had one foot in the “The West Wing” and one in “Desperate Housewives,” one foot in the world of hotshot alphas ruling the globe, and one in the world of middle-age women humiliated by their husbands’ dallying with office cupcakes.

She won her Senate seat only after becoming sympathetic as a victim. And she still struggles with the balance between her Mars and Venus sides, sometimes showing her political steel and other times fetching coffee for male colleagues.

Senator Obama glides between the black and white political worlds. In New Hampshire on Sunday, speaking to nearly all-white audiences, the Harvard-educated lawyer looked utterly at home, dressing like a Wall Street banker on casual Friday and sounding as white as Lou Dobbs.

He quoted Martin Luther King Jr. and Louis Brandeis with equal aplomb and wryly noted that when he worked rebuilding a black community on Chicago’s South Side, people there couldn’t pronounce his name and called him “Yo Momma.”

He admits that he talks to black groups with a different cadence, but says that’s because he’s picking up a different rhythm from the audience. He rejects what he calls the expected script for black politicians, “that for them to be authentically black they have to somehow offend white people,” as he told Jeff Zeleny in The Chicago Tribune. Mr. Obama rejects complaints from blacks that he’s not black enough; but as Mr. Zeleny noted, Hawaii, where the senator’s white mother from Kansas and black father from Kenya met, and where he grew up and went to prep school, is not exactly the ’hood.

While Bill Clinton’s campaign pollsters used to worry that Hillary was not coming across as maternal enough, Senator Obama peppers his talks with remarks about being a father and husband. “I don’t miss diapers,” he confided to some parents at a book signing in New Hampshire, and later told reporters that he would decide whether to run with his wife, Michelle — “the smartest, toughest, funniest best friend that I could ever hope for.”

He was equally graceful reaching out to the female audience on “Oprah” and the male audience on “Monday Night Football,” when he did the opening skit this week on the audacity of hype, ending by putting on a Bears hat and flashing that killer smile. (The Windy City doubleheader must have made Hillary, a Chicago native, pea green.)

The most politically unproblematic black man to ever dream of national office, Senator Obama is Senator Clinton’s worst nightmare. He is as comfortable in his skin as she is uncomfortable in hers.

“When push comes to shove, I think gender is going to be a harder sell than race,” said Deb Chase, a teacher from Gilmanton, N.H., who followed Senator Obama from Portsmouth to Manchester, to see him twice. “It’s not that people don’t intellectually believe in the idea of a woman as president. But look at the schools here — there are lots of women teaching elementary school and very few women superintendents of schools.”

But, like other Democrats in New Hampshire, Ms. Chase thinks the issue transcends gender, that the problem is Hillary herself.

In terms of legislative and senatorial substance, it’s a wash. So far, she’s Senator Pothole and he’s Senator Bestseller List.

But unlike her impertinent challenger, Hillary will have to do a lot of fancy dancing to explain her opinions about the Iraq war. And we know that she’s not a good dancer.

Built on a cult of personality, her campaign will be ruthless in stomping on Obambi, as one Chicago columnist referred to the idealistic pol who was too naïve to steer clear of a sleazy fund-raiser who wanted to buy his favor with a sweetheart real estate deal.

Hillary hasn’t waited this long and market-tested this assiduously for nothing. Obambi’s message may be mushy communitarianism — we’re a crazy quilt and why can’t we all get along? — but her message is simply the Divine Right of Clintons.

So there is a second question, perhaps one that will trump race and gender. It’s about whether he’s tough and she’s human.