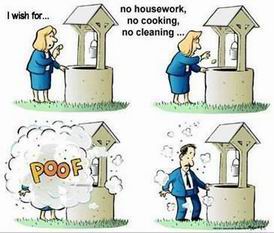 Conservatives aim to keep women "barefoot and pregnant," according to the federal Liberal Women's Caucus in Canada.

The Liberal women charge that their conservative government is out to keep women "barefoot and pregnant in the kitchen" by "pursuing an ideological agenda that ignores women's needs and cuts funding to those who need help the most."

Meanwhile here in the U.S., a raving anti birth control and pro abstinence nut is in charge of federal family planning programs. And compared to the rest of the 'developed' world, our pro family social programs are embarrassingly stingy at best and nonexistent at worst.

I only wish we here in the U.S. had some of Canada's problems. But, of course, conservatives in Canada look like liberals when compared to the 19th century rightwingers who have been leading the U.S. government.

I expect the Canadians will have universal child care fully in place while we are left still dreaming, in the USA, about universal health care.

The Liberal women released a set of party policies today aimed at what they say are the most pressing social and economic issues facing Canadian women, particularly working women and their families, caregivers and seniors.

Improving the social and economic equality of women is the driving force behind the first volume of what the Liberals are calling their "Pink Book."

The recommendations include commitments to reinstate the Liberal child-care and early-learning plan the Tories scrapped after the last election; to reverse budget cuts to social programs and Status of Women; to develop a national caregiver agenda; to provide more benefits to the self-employed, and to secure equal pay for work of equal value.

Cuts to social programs hurt women? And the families that women care for?

Hat tip to Samhita over at Feministing