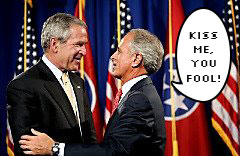 The Defense of Marriage Act and this state's newly passed anti gay marriage amendment are not enough for Bob Corker. The nation's sole Republican freshman senator would like to see same-sex marriage become even more illegal via an amendment to the U.S. Constitution.

And that's the liberal side of Bob Corker.

As to civil unions, Corker says he "would be open to looking" at civil unions as long as they do not resemble marriage.

In other words, as long as there is absolutely no benefit to entering a civil union, Bob Corker will be happy to entertain the idea of granting his approval.

Would you change the U.S. Constitution to define marriage as being between one man and one woman, as Tennessee voters decided to do here?

Yes. I would support a constitutional amendment. … You end up having a situation where there is so much mobility in our country, where people from Massachusetts move to Tennessee and vice versa. For that reason and just with the activism in the federal court system … if that amendment is proposed, it is something I would support.

What are your thoughts on giving same-sex couples rights as civil unions?

If a civil union is the exact same as a marriage, then I do not support that. I do understand there are certain legal issues that (same-sex) couples would like to pursue. Again, if it's not something that resembles a marriage, then I would be open to looking at that. … I know what has been discussed is certain types of visitation in the hospital and things like that. I certainly would be open to looking at things like that. But if civil union is something that, again, is really just taking place of the word marriage, that's not something I would support.