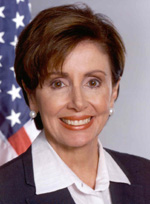 I'll be sitting here blogging all day and all night just watching the Big Blue Democratic Tsunami roll in. I'll be breaking out the bubbly the minute I know that the rightwing nightmare and my own personal longtime liberal fantasy of Speaker Pelosi has begun to come true! After that, I don't even need anything for Christmas (unless it's the Senate).

I haven't included any polls or predictions on Harold Ford because the polls are all over the place -- it can go either way. The racist attacks on Harold Ford may well cause a big backlash. If you haven't voted yet, I hope you will vote for Ford. If you need a reason to vote for him -- other than the critical need to bring down the nightmare One Party Rule in this alleged democracy -- R. Neal over at KnoxViews has some reasons, including a list of progressive legislation sponsored by Ford, no kidding.

Democrats need 15 seats to take back the House and 6 seats to own the Senate.

The latest polls portend disaster for the Republican Party tomorrow. The House appears to be gone; the Senate is teetering on the brink. John Zogby's polling is tracking 15 swing House districts, and he finds Democratic leads in 13. Since Dems need only 15 to take control - and will doubtless pick up several not on Zogby's list - it seems we're in for several years of Speaker Nancy Pelosi.

Democrats are set to gain 19 House seats, two Senate seats, and five governorships in tomorrow's elections. It is a sign of Republicans' sorry state that, at this point, this is actually a very favorable outlook for them.

Democrat Jim Webb has surged ahead of Republican George Allen in the last poll of the campaign, conducted for News-7 by SurveyUSA. The survey shows Webb with 52% of the likely voters, with 44% going to Allen.