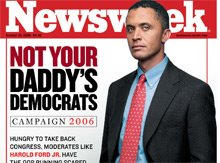 Harold Ford looks good on the cover of Newsweek. He'll look even better after Tennessee sends him to the Senate.

What we do on election day here in Tennessee - to paraphrase Michael J. Fox - has the potential to make life better for people all over the nation and the world.

There will be plenty of time after election day to worry about little details like pushing Ford to the left.

Democrats, even liberal ones, will let Ford be whoever he wants to be, for one simple reason: he may deliver them the Senate. Two weeks before the midterm elections, the Democrats' fate lies not in the hands of the party's much-dissected antiwar left but with a handful of careful, calculating centrists like Ford.

For two years the Democratic political establishment has been unabashedly applying one litmus test to candidates: their ability to win. In the Senate, Schumer took flak from activist groups when he backed candidates like Pennsylvania's Bob Casey, who is anti abortion rights. In the House, Demo-cratic Congressional Campaign Committee chair Rahm Emanuel corralled a group of Iraq and Afghanistan vets to run as "macho Democrats" against Republican incumbents. At Howard Dean's Democratic National Committee--well, who's even heard anything from Howard Dean? He's largely taken a back seat to Bill Clinton and Barack Obama in making the Democrats' prime-time case. "The days of Democrats' having to check 28 boxes before they run are over," Schumer says. "We want to win."