Clinton, Obama, McCain and Laura Bush to Campaign in Tennessee 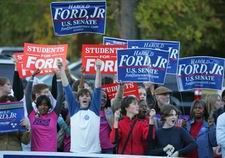 An impressive line-up of political rock stars and Stepford Wife Laura Bush will be doing some last minute campaigning here in Tennessee this week.

Bill Clinton will appear with Harold Ford at a get-out-the-vote rally in Memphis on Wednesday. On Sunday, Sen. Barack Obama will be in Nashville. Obama will appear at several locations, including the Historically Black Tennessee State University.

Sen. John McCain will also be in Nashville on Sunday "for a $250-per-couple fundraiser for Corker at the Cabana restaurant."

George Bush is so unpopular in Tennessee that he's sending Laura to do his dirty work. Laura Bush is speaking at a campaign luncheon for Bob Corker in Republican stronghold Franklin today.

Unlike the Republican events, the Democratic events will be free and open to the public.