A Platform of Bigotry 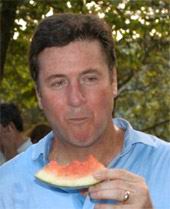 George Allen, the clownish, Confederate-flag-loving senator from Virginia, has apparently been scurrying around for many years, spreading his racially offensive garbage like a dog that should be curbed. With harsh new allegations emerging daily, it’s fair to ask:

Where are the voices of reason in the Republican Party — the nonbigoted voices? Why haven’t we heard from them on this matter?

Mr. Allen has long been touted as one of the leading candidates for the Republican presidential nomination in 2008. But this is a man who has displayed the quintessential symbol of American bigotry, the Confederate battle flag, on the wall of his living room; who put up a hangman’s noose as a decoration in his law office; who used an ethnic slur — macaca — in an attempt to publicly embarrass a 20-year-old American student of Indian descent; and who, according to the recollections of a number of his acquaintances, frequently referred to blacks as niggers.

The senator has denied the last allegation. But his accusers are low-keyed, straight-arrow professionals who have no obvious ax to grind. They, frankly, seem believable.

Dr. R. Kendall Shelton, a North Carolina radiologist who played football with Mr. Allen at the University of Virginia in the 1970’s, recalled a number of incidents, including one in which Mr. Allen said that blacks in Virginia knew their place. Dr. Shelton said in a television interview that he believed then, and still believes, that Mr. Allen was a racist.

Beyond the obvious problems with the senator’s comments and his behavior is the fact that he so neatly fits into the pattern of racial bigotry, insensitivity and exploitation that has characterized the G.O.P. since it adopted its Southern strategy some decades ago. Once it was the Democrats who provided a comfortable home for public officials with attitudes and policies that were hostile to blacks and other minorities. Now the deed to that safe house has been signed over to the G.O.P.

Ronald Reagan may be revered by Republicans, but I can never forget that he opposed both the Civil Rights Act and the Voting Rights Act of the mid-1960’s, and that as a presidential candidate he kicked off his 1980 general election campaign in Philadelphia, Miss., which just happened to be where three civil rights workers — Andrew Goodman, Michael Schwerner and James Chaney — were savagely murdered in 1964.

During his appearance in Philadelphia, Reagan told a cheering crowd, “I believe in states’ rights.”

The lynching of Goodman, Schwerner and Chaney (try to imagine the terror they felt throughout their ordeal) is the kind of activity symbolized by the noose that Senator Allen felt compelled to put up in his office.

One of the senator’s Republican colleagues, Conrad Burns, is up for re-election in Montana. He’s got an ugly racial history, too. Several years ago, while campaigning for a second term, Mr. Burns was approached by a rancher who wanted to know what life was like in Washington. The rancher said, “Conrad, how can you live back there with all those niggers?”

Senator Burns said he told the rancher it was “a hell of a challenge.”

The senator later apologized. But he has bounced from one racially insensitive moment to another over the years, including one occasion when he referred to Arabs as “ragheads.”

You don’t hear President Bush or the Senate majority leader, Bill Frist, or any other prominent Republicans blowing the whistle on the likes of George Allen and Conrad Burns because Republicans across the board, so-called moderates as well as conservatives, have benefited tremendously from the party’s bigotry. Allen and Burns may have been more blatant and buffoonish than is acceptable, but they have all been singing from the same racially offensive hymnal.

From the Willie Horton campaign to the intimidation of black voters in Florida and elsewhere to the use of every racially charged symbol and code word imaginable — it’s all of a piece.

The late Lee Atwater, in a 1981 interview, explained the evolution of the Southern strategy:

“You start out in 1954 by saying, ‘Nigger, nigger, nigger! By 1968 you can’t say ‘nigger’ — that hurts you. Backfires. So you say stuff like forced busing, states’ rights and all that stuff. You’re getting so abstract now [that] you’re talking about cutting taxes, and all these things you’re talking about are totally economic things and a byproduct of them is [that] blacks get hurt worse than whites.”

It’s been working beautifully for the G.O.P. for decades. Why would the president or anyone else curtail a winning strategy now?