Church Erects Christian Statue of Liberty – What Will the French Say? 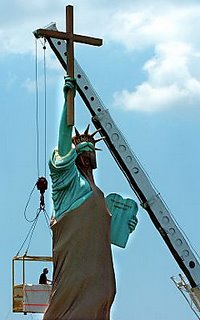 A Memphis Church appears to have more money than it knows what to do with. So, natch, it built a giant copy of the Statue of Liberty, Christian style. Is it just me, or does the cross in her hand resemble a club? And how about that stone tablet with the Ten Commandments? Is she going to drop it on my head if I don't sign up?

And the crown on her head marked with the word Jeovah? It looks like a weapon to me.

Can we please get some French lawyers in this state? General?

"Church members said the mixture of the statue and Christian symbols represent 'America belonging to God through Jesus Christ.'"

A Memphis resident who lives in the neighborhood said she "now takes the long way home to avoid 'the big green thing.'"

The World Overcomers Outreach Ministries Church plans to disrobe the Giant Green Church Lady on the 4th of July.

The Church forked over $260,000 for the seven-story Church Lady.

Cause Churches are for flaunting an excess of wealth and who gives a fuck if Tennessee is so poor that it loses more babies in the first year of life than do 46 other states? Big deal if the Governor cuts sick people off the state healthcare program in order to save money! So what if Memphis schools have a graduation rate of 48.5 percent?

What's any of that got to do with Christianity, anyway?

But the Overcomers don't just spend their money on transforming icons of democracy into symbols of theocracy, they also work on petitions in support of the Federal Hate Amendment.

Cuz the Church Lady's cross is actually a WMD for stamping out the civil liberties of gays and other nonconforming troublemakers.

Or, as Pesky Fly suggests, maybe they just have a lot of vampires in Memphis.

Update: Our Giant Green Church Lady's fame is spreading. Shakespeare's Sister calls her a Lawn Ornament. Sister Novena says she is a Summary of the Problem. And over at Pandagon, she is deemed an example of Fundies Gone Wild.