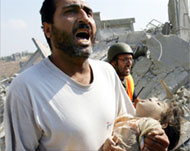 The deplorable and shameful U.S. continues to defy its allies and the world by refusing to call for an immediate ceasefire. If there is any justice in this world, we here in the U.S. are going to have hell to pay for our complicity in this latest of our dear leader's crimes against humanity.

Thousands of Lebanese stormed the U.N. headquarters in Beirut this morning after a deadly Israeli airstrike killed dozens of women and children -- "at least 50 people - more than half children - in a southern Lebanese village." At this moment, the Red Cross is reporting (via CNN) that the number of dead children is 37.

Demonstrators tore down a United Nations flag outside the building and ripped it to shreds and called on Hizbollah leader Sayyed Hassan Nasrallah to launch rocket attacks on Tel Aviv.

Enraged protesters armed with rocks and iron bars broke into the U.N. building to vent their anger by wrecking U.N. offices. (video) According to CNN, reports suggest that the protesters may move on to the U.S. embassy.

CNN reports that Arab TV is giving non stop coverage to the massacre. In the Arab world, you can see the "horrendous" images of "human carnage" and ghastly images of dead children in pajamas being pulled from the rubble.

[A]ll Arab TV networks are covering live the recovery of bodies -- children and women mostly--from the Israeli massacre in Qana. You saw them digging out children from under the rubble. Viewers were warned about the images. AlJazeera's correspondent, `Abbas Nasir, broke down. Even the pro-Bush AlArabiya TV had to interrupt its Saudi stock coverage to go to Qana.

Meanwhile, here in the land of the free, if you want to see live coverage of the carnage, you'll have to access the media of the unfree Middle East. Or as one CNN correspondent said, the graphic images are simply too horrendous for "our viewers."

We can supply the weapons of war, we can even wage war, but we can't view the carnage of war.

Arab TV is also showing this picture of smiling Condi and the Israeli president.

Yesterday, Bush once again effectively made the point that the GOOD U.S. and Israel have God on their side while the EVIL enemy has blood on their hands. Or: "They’re violent, cold-blooded killers who are trying to stop the advance of freedom. And this is the calling of the 21st century, it seems like to me. And now’s the time to confront the problem."

Told of today's massacre, Rice said she is "deeply saddened by the terrible loss of innocent life."

But not sad enough to call for a ceasefire.

Prime Minister Fouad Siniora said Rice is not welcome in Lebanon until there is a ceasefire. "There is no place on this sad morning for any discussion other than an immediate and unconditional ceasefire as well as an international investigation into the Israeli massacres in Lebanon."

News Hounds reports that Fox has spent the morning trying to absolve Israel of all blame, meanwhile there are reports that there were no Hezbollah, or "no men of fighting age in the town."

And the insanity continues.