The Red Burka for A Red America 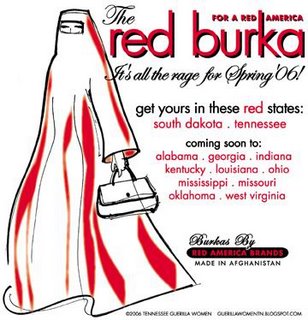 Get your Red Burka T-Shirt here, and tell the world what you think about the relentless, never-ending, Republican-led and State-financed War on Women.

I plan to wear a Red Burka Shirt when I go downtown to watch my elected representatives vote on whether or not women should be returned to the 19th century when the male-dominated state had the unmitigated audacity to rob women of their personhood.

We have not forgotten and we will not go back!

Tennessee is now on the frontline of the abortion wars. South Dakota's recent abortion ban is not an isolated attack on women's rights. Tennessee is one of at least 12 states engaged in the battle to defend women's health care against hard-line, anti-choice, anti-family planning politicians.

Tennessee currently has 58 bills pending in the Legislature that deal specifically with abortion or reproductive healthcare. Forty-three of those 58 initiatives would take away the rights of Tennessee women.

These measures are so cynical and cruel that many would even force a victim of rape or incest to bear the child of her attacker. While Tennessee legislators are trying to make it harder for women to access abortion services, they are doing next to nothing to help women prevent unintended pregnancies.