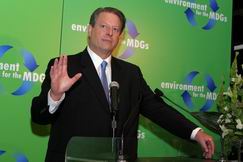 In a piece title, Look Out, Here Comes Al, Dick Morris writes in The Hill that the real battle in 2008 may well be Gore v. Clinton.

According to Morris, there is a history of candidates coming back to win the White House after first losing the Electoral College but not the popular vote.

And Gore may be a man whose time has come in his party. It was he who warned of climate change and predicted its consequences. Hurricane Katrina was just a fulfillment of the prophesies Gore wrote about in his late-1980s book Earth in the Balance. He has been an energy-conservation nut for years, and his obsessions with alternatives to oil will play better and better as we come to realize how our addiction to oil has led us to dependency on the dealers of this particular drug — Iran, the Saudi royal family and Hugo Chavez.

But Gore has three things going for him: A perception that he was robbed of the White House and Hillary’s possible stubbornness in continuing to back the war.

The third thing? The weather. As the evidence of global climate change impresses everyone who doesn’t work at the White House, Gore looks more and more like a man whose time may have come.