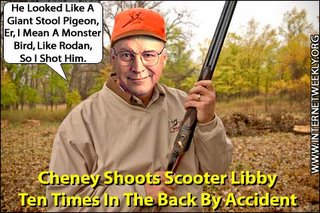 WASHINGTON (IWR Satire) - "For the second day in a row, Vice President Dick Cheney has accidentally shot someone while hunting. This time Mr. Cheney shot his former aid Scotty Libby ten times in the back near the Lincoln Memorial. The Vice President, who often likes to target practice on illegal aliens, sparrows and titmice in the National Mall, claimed he mistook Mr. Libby for the Japanese science fiction monster Rodan. "It's really too bad, because I was prepared to testify on his behalf at his trial next year," said Cheney through a twisted evil grin."

Apparently, the White House was hoping to stay mum about the VP for Torture's little mishap with a gun and buddy. So little time, so many White House secrets to guard.

The more than 18-hour delay in news emerging that the Vice President of the United States had shot a man, sending him to an intensive care unit with his wounds, grew even more curious late Sunday. E&P has learned that the official confirmation of the shooting came about only after a local reporter in Corpus Christi, Texas, received a tip from the owner of the property where the shooting occured and called Vice President Cheney's office for confirmation.

The confirmation was made but there was no indication whether the Vice President's office, the White House, or anyone else intended to announce the shooting if the reporter, Jaime Powell of the Corpus Christ Caller-Times, had not received word from the ranch owner.

In an odd disparity, Armstrong told the Houston Chronicle that Whittington, 78, was "bruised more than bloodied" in the incident and "his pride was hurt more than anything else." Yet he was airlifted to a hospital and has spent more than a day in an intensive care unit.

The Chronicle also reports Monday that hunting accidents are amazingly rare in Texas. In 2004, it said, the state's 1 million-plus hunters were involved in only 29 hunting-related accidents (19 involving firearms), four of which were fatal.

The delay in announcing the shooting "will likely be the main question asked of the White House about the apparent accidental shooting of a 78-year-old man during a Texas hunting trip by the vice president," the Tribune's James wrote on the Washington bureau's blog at the newspaper's site.

"When a vice president of the U.S. shoots a man under any circumstance," James noted, "that is extremely relevant information. What might be the excuse to justify not immediately making the incident public?