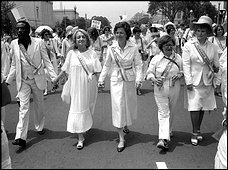 Betty Friedan died Saturday, on her 85th birthday, of congestive heart failure. That the godmother of the second wave of American feminism should succumb in such a symmetrical manner, and from the ailment that now kills more women than any other, serves as a signifier, both metaphorical and practical, for us all, women and men alike.

Friedan’s groundbreaking 1963 bestseller, “The Feminine Mystique,” thrust into the national dialogue “the problem that ha[d] no name”: that is, the given that the sole purpose, and desire, of an American woman was to be a housewife/mother. That this “problem” had no name speaks volumes; we easily lose sight today of just how revolutionary and radical her conclusions were in that essentially pre-’60s era. Friedan’s well-researched and devoutly expressed premise at the time— that perhaps some, even many, women might demur from this conventional-wisdom dictate—was nearly universally received (i.e., by media; at the time, dominated, of course, by men) with predictable derision, denial, and the kind of “politics of personal destruction” that today would put Karl Rove and Kate O’Beirne to shame. However, unsurprisingly to many others (i.e., the many, many women who identified with the un-nameable “problem”), Friedan’s findings struck a chord that resonated nationwide and instigated a renaissance in the push for women’s equality (the first wave of which had descended into doldrums after the 75-year-long struggle for women’s right to vote finally succeeded in 1920).

Everything afterward proceeded from Friedan’s seminal tome, and from her subsequent co-founding of the National Organization for Women (NOW) in 1966. Political in-fighting among newly awakened and hastily formed women’s-rights groups inevitably led to factional fallout over such previously ignored concerns as pay equity, abortion, and lesbian issues: again, all theretofore unconsidered, hence messy and openly ridiculed, real-life considerations for millions of women. Simultaneously celebrated for her visionary championing of women as full-fledged human beings with aspirations that might conceivably transcend the cultural constraints of helpmeet/breeder, and castigated by more radical elements of the movement for her stubborn adherence to the possibility that women could want more for themselves yet still love men, Friedan became the public face of ‘60s feminism: angry, conventionally unattractive, gifted, strong, controversial, conflicted; struggling against eons of prejudice and tradition to make sense of modernity and rationality; always resolute, and absolutely committed to the cause until the day she died.

There is bittersweet irony in the fact that heart disease, the No.-1 killer of American women today, was the ultimate stumbling block for one of the greatest women in recent US history. This is because without Friedan, and the legacy of awareness of women’s issues that she pioneered, we would probably not even be aware, because we would not have had medical research that told us, that heart failure is not exclusively a killer of men. Because of Friedan’s perceptive translation for the popular culture of the hidden, and physical, heart of women, we all benefit today. For that, and so, so much more, our own hearts are grateful, and break.