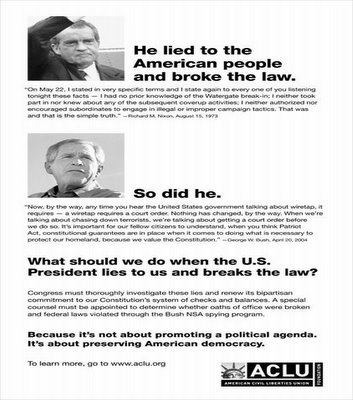 The President Lied to the American People and Broke the Law, reads this full page ACLU ad in today's (12/29/2005) New York Times.

The ACLU is calling for the appointment of a special counsel who will investigate King George.

"President Nixon was not above the law and neither is President Bush," said ACLU Executive Director Anthony D. Romero. "President Bush cannot use a claim of seeking to preserve our nation to undermine the rules that serve as our foundation. The Attorney General, who may have been involved with the formulation of this policy, must appoint a special counsel to let justice be served."

In a formal request sent last week to Attorney General Alberto Gonzales, the ACLU called for the appointment of "an outside special counsel with the independence to investigate and prosecute any and all criminal acts committed by any member of the Executive Branch in the warrantless electronic surveillance of people in the United States over the past four years by the NSA," noting that "such crimes are serious felonies and they need to be fully and independently investigated."

Hat tip to Jeralyn at Talkleft