Torture Quotes of the Day 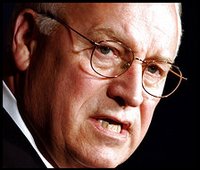 Speaking of ethics, Vice Cheney subscribes to the 'by any means necessary' school of thought. Will Cheney be the teacher in the mandatory ethics class? How many days will be spent on Vice's favorite chapter, The Ends Always Justify the Means?

"A lot of what needs to be done here will have to be done quietly, without any discussion, using sources and methods that are available to our intelligence agencies, if we’re going to be successful. That’s the world these folks operate in. And so it’s going to be vital for us to use any means at our disposal, basically, to achieve our objective." -- Vice Dick Cheney

"Our Leader is in a life and death struggle with Senate and Congressional Democrats and RINOs like Chuck Hagel and John McCain over His God-given right to beat, rape, shock, and otherwise torture brown people... If NPR can give a contributor a mug every time he or she donates a hundred bucks, why can't we offer a genuine fingernail pulled from an Iraqi farmer to everyone who contributes $1000 or more to the GOP?" --Jesus General

"Therefore I think we should torture Scooter Libby. ..[I]f we are going to get to the bottom of who put an American CIA agent in jeopardy, it is incumbent upon us to torture Scooter. Water board him, strip him naked and smear him with his own feces and walk him on a leash down the mall . . A secure America demands no less." --Tbogg

"The debate in the world has become about whether the U.S. complies with its legal obligations. We need to regain the moral high ground." -- Anonymous Senior Administration Official, {too scared to reveal her identity, lest she be thrown into undisclosed torture chambers).

"We do not torture." -- pResident George W. Bush

See: White House staff rushes to prepare DVD on torture, for the Commander Is Clueless