Dems Win - Bush Is the Electoral Kiss of Death 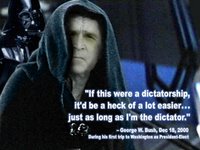 Update: Has it been a long time since we've had any victories, or what? Just wait until next year when Republicans can finally crawl back into their miserable caves of defeat and torture each other for a change.

"Yesterday Democrats swept to victory in virtually every high profile race across the country."

"In a sharp repudiation of Gov. Arnold Schwarzenegger, Californians rejected all four of his ballot proposals Tuesday in an election that shattered his image as an agent of the popular will."

If only Bush had stayed away from Virginia, maybe his hard right candidate would have stood a chance. Instead Democrat Tim Kaine beat Kilgore by 6 percentage points.

And it looks like California voters are expressing their disapproval of Arnold by defeating his ballot initiatives. At the time of this posting, two of them (76 & 77) have been beaten by wide margins. Tallies are not yet final, but the others also appear to be doing poorly. According to the San Francisco Chronicle, "moderates have deserted Arnold," as "all four of the Republican governor's measures were headed for defeat."

President Bush made a much-publicized last-minute campaign stop in Virginia to stump for Mr. Kilgore, but the effort backfired, or at least failed to make a dent. Everyone from political consultants to leaders of nations in the remote corners of Asia and Africa will be reading bad omens for the Republicans in what happened after Mr. Bush left.

...the Bush administration has a lot to worry about.

Bush put his wispy political prestige on the line in the Virginia governor's race and lost Tuesday when the candidate he embraced in a last-minute campaign stop was soundly defeated. While there are many reasons for Jerry Kilgore's defeat, chief among them his poor campaign, giddy Democrats said the Virginia race as well as a Democratic victory in New Jersey prove that Bush is a political toxin for Republicans.

It should be a lot of fun next year, watching Republican candidates as they flee from Bush and entreat him to please stay out of their state. Frankly, we hope the kiss of death visits our state often.

Bush Election Dubya Politics Culture of Corruption Schwarzenegger
Posted by egalia at 10:30 AM