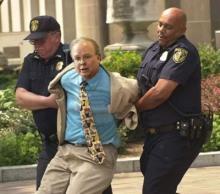 Visualize Rove in leg shackles. Rumors are flying around Washington - and the internets - of 22 Plamegate indictments that could come as early as Thursday (today!) or Friday.

The D.C. Rumor mill is thrumming with whispers that 22 indictments are about to be handed down on the outed-CIA agent Valerie Plame case. The last time the wires buzzed this loud — that Tom DeLay would be indicted and would step down from his leadership post in the House — the scuttlebutters got it right.

Can it be a coincidence that the White House appears to be distancing President Bush from embattled aide Karl Rove? “He’s been missing in action at more than one major presidential event,” a member of the White House press corps tells us.

David Edwards at Bradblog wonders how the 22 indictments might line up with the "21 Administration Officials Involved In Plame Leak" list at Think Progress. A list that includes, Rove, Cheney and, heh heh, Bush.

Many have noted that Rove has been strangely absent from White House affairs, which suggests that Bush is attempting to distance himself from his brain. This could explain some of Dubya's failures to escape unscathed from some of his more recent blunders.

Reuters reports that we will know something within days, and adds that Karl Rove's attorney now refuses to confirm or deny that Rove is a target. In the past Rove's lawyer has always issued denials. Reuters says it heard the news from "legal sources close to the investigation."