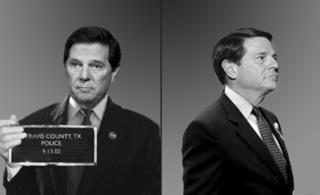 The good news just keeps on coming. An arrest warrant has been issued for Tom Delay. Delay is the former exterminator, current Republican Congressman who once said:

"I am the federal government."

Delay must show up at "the Fort Bend County jail for booking on state conspiracy and money laundering charges." The Republican's first court appearance is set for this Friday.

I hope to take the day off so I can sit at home and laugh at the pathetically heartless and arrogant crook.

Delay hopes to be re-elected next year. Perhaps he can run his campaign from San Quentin.

The Republican has been forced to step down from his position as U.S. House majority leader, but he hopes to resume the leadership position because his mafia style tactics seem to be a prerequisite for Republicans to succeed at anything.

"To any sheriff or peace officer of the state of Texas, greetings, you are hereby commanded to arrest Thomas Dale DeLay and keep him safely so that you have him before the 331st Judicial District Court of Travis County."

Delay has recently made use of the internets to "plead his case and bash Travis County District Attorney Ronnie Earle."

If you wish to tell Tom Delay you hope he rots in jail:

In his own words:

"I am the federal government." - DeLay was responding to a government employee who tried to prevent him from smoking on government property. As reported in the New York Times [2003 June 13]