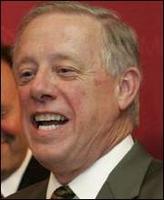 "An East Tennessee man's lack of needed medicines — which had been capped by TennCare — was a contributing factor to his death last month, his doctor found, noting it on the death certificate."

In the same article, the doctor makes the point that the man was seriously ill and it was the illness that caused his death. Yes, but in the advanced nations of the world seriously ill people take meds in order to stay alive.

But according to Governor Bredesen, this state cannot afford to offer the benefits of modern medicine to its sick, disabled, elderly and poor. The Governor has cut some 200,000 from the state's expanded Medicaid program and capped prescription benefits. Cuz Medicaid is a lot like socialism, doncha know?

The pathetic excuse for a Democratic Governor is saving money. The one-term governor's rainy day fund is for something more important than saving lives.

Reasons for the state Democratic party to abandon Bredesen:

Patients worried about how they'll fill their prescriptions

See Sharon Cobb and GeoTennCare for more of the grim details, I have to go puke.