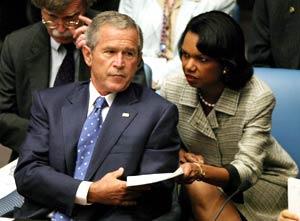 Editor and Publisher reports that the media is having a field day with the implications of the "leader of the free world" writing a note to Secretary of State Condeezza Rice about his need to go pee. According to the paper, the story will be used by some to illustrate the historic arrogance or failure of the U.S. to show even a minimal degree of respect for the U.N.

NEW YORK With confirmation that an accidental photo of President Bush at the United Nations on Wednesday, writing a note to Secretary of State Condeezza Rice about a “bathroom break,” was indeed real, newspapers around the U.S. and abroad are now planning to run it widely. But many, it seems, will treat it as something more than a joke.

A source at the Washington Post tells E&P that the paper is considering it for prominent play, in the context that, at least in some minds, it raises questions about overall perception of the U.S. at the United Nations, right or wrong. Reuters reports extremely strong interest in the photo today.

In the media accounts that treat the story as a joke, there are glimpses of the resentment felt toward the U.S. because of past behavior at U.N. meetings. But the Reuters photo of Bush asking permission to go to the bathroom is apparently giving the world a much needed break from the usual news of death and destruction via war, famine, poverty, hurricane, government incompetence, etc.

Since this blogger feels the same need for an occasional break from the non-stop depressing news of death and devastation, below is a snapshot of some of the fun the media is having at Bush's expense. The European media seem to be having the most fun. But after all the insults the Bush Administration has hurled at "Old Europe" and the United Nations, who can blame them?

Delegates thought it was another example of American arrogance -- U.S. officials are notorious for leaving meetings in mid-session, especially at the General Assembly... But it appears that Bush meant no insult, judging from a note he handed to Secretary of State Condoleezza Rice shortly before he left.

The London Times:
Please Miss, may the US President be excused from the room?

It WAS one of those moments that politicians dread. Sitting in America’s chair in the United Nations Security Council, President Bush realised he simply had to go to the toilet. He pencilled an urgent note to Condoleezza Rice, his Secretary of State, who was sitting just behind him: “I think I may need a bathroom break? Is this possible? W.”

Irish Examiner: To pee or not to pee ... that is the question

TENSIONS were running high as the world’s most powerful men and women discussed international security and the future of the United Nations. At the high-pressure meeting, President George W Bush sat stern-faced, surrounded by diplomats and the largest gathering of world leaders in history. Mr Bush, who has been a critic of the UN in recent years, picked up his pencil and wrote a short note to his Secretary of State Condoleezza Rice. Around him, the UN delegation wondered what secrets he was passing to his most trusted adviser. But Mr Bush was just desperate for the toilet.

Scotland Daily Record:
PLEASE MISS, I NEED TO GO TO THE TOILET

AMERICAN President George Bush is the world's most powerful man - but he still needs to ask permission to go to the toilet. Desperate Dubya scrawled a note to Condoleezza Rice, asking to be excused during the United Nations' 60th anniversary summit in New York. It read: "I think I may need a bathroom break. Is this possible?" It is not known how Secretary of State Rice responded - or if she reminded Bush to rinse his hands after visiting the little boys' room.

South Africa Independent Online: A Leak at the U.N. Building

American President George Bush had to scrawl a note to his secretary of state, Condoleezza Rice, when he was bursting for the toilet during a top-level meeting.

When George W. Bush was taken short at the UN Security Council, he did what small boys in his situation have been doing since school began. He asked Miss. He scribbled a note to Condoleezza Rice: “I think I may need a bathroom break. Is this possible?”

The Sun (London) I fear a leak, Condi

PRESIDENT Bush ran into an international crisis yesterday — when he urgently needed to go to the LOO during a vital United Nations debate. . It was not clear why the most powerful man in the world needed Condi’s permission to leave the room.

Is this guy for real? The man in charge of running our country, doesn't know when to take a pee break? Its more and more obvious everyday that George Bush, not even suitable to make a decision on a bathroom break, cannot make rational decisions in regards to running this country.

He’s the most powerful man in the world, but President George W Bush has to ask permission to go to the loo.. But let’s face it, the biggest shock of all is the fact that he can spell.