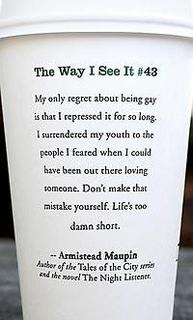 The ultra conservative women at Concerned Women for America are not thinking about John Roberts' upcoming senate confirmation hearings. Rather, they are worrying about the gay and liberal friendly coffee cups at Starbucks.

Let's hear it for the politics of distraction.

A national Christian women's organization is accusing the Seattle-based coffee maker of promoting a homosexual agenda because of a quote by author Armistead Maupin, whose "Tales of the City" chronicled San Francisco's homosexual community in the 1970s and 1980s.

Maupin's quote — one of several dozen in "The Way I See It" promotion — says his only regret about being gay is that he repressed it for so long.

"I surrendered my youth to the people I feared when I could have been out there loving someone. Don't make that mistake yourself. Life's too damn short."

Concerned Women for America, which promotes itself as the antithesis of the National Organization for Women and boasts 8,700 supporters in Washington, says most of those quoted on the coffee cups are liberal.

The coffee company won't be pulling the Maupin quote — or any other — from the campaign, but in fact will expand it to feature quotes from regular customers. "Embracing diversity and treating people with dignity is one of the guiding principles of our corporation," Lincoff said. (Hat tip to Wonkette)

UPDATE: You can thank the people at Starbucks for being grown-ups here.

UPDATE 2 The controversy continues to rage. While conservatives are surely bombarding Starbucks with complaints, several bloggers point out that they aren't calling for a boycott. A couple of bloggers have some very good ideas about why that is. And the Seattle Times editorializes that Starbucks has "an absolute right to inspire, comfort or offend.."