What Has the Democratic Party Done for Women Lately? 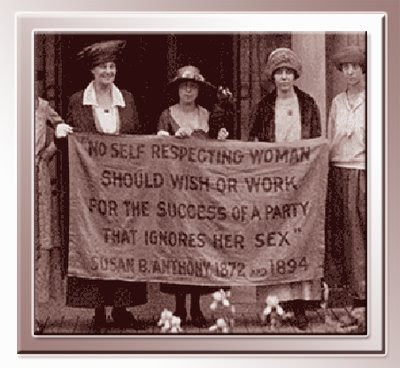 "No self respecting woman should wish or work for the success of a party that ignores her sex."
-- Susan B Anthony, 1872

"There cannot be true democracy unless women's voices are heard."
-- Hillary Rodham Clinton, 1997
In the 232 years of this nation's history, women have made the most gains toward equality in the eras when the outrage over women's low status has reached a boiling point. Whenever women can no longer tolerate the inequality, many different feminist viewpoints about how to proceed emerge. What's important is not that all the women agree, what's important is that women are finally outraged enough to raise their voices and do something!

Volumes of feminist history attest to the fact that many women pursuing many different, and even conflicting, paths toward equality leads to real gains in the project of elevating the status of women and girls. While I don't think it is absolutely necessary that we respect the different paths women choose -- since our ultimate goal is the same, probably we will all get their sooner if we do listen to each other and do it with some measure of respect.

Photo: Feminist History Flashback -- Members of the National Woman's Party (NWP) pursued women's suffrage with a strategy based on the fact that women have no political party. When the Democratic Party refused to support women's suffrage, the National Woman's Party sought to punish the party by campaigning on behalf of the Republican Party, even though the Democratic Party was generally regarded as the more women-friendly of the two.