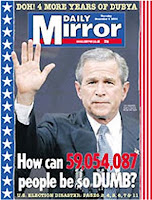 Mike Huckabee has since emerged as one of the Republican front-runner candidates for the presidency. The Canadians are really laughing now. Cause Huckabee's foreign policy expertise is almost as stellar as that of the notoriously dumb Republican who currently resides in the White House.

When Rick Mercer comes on the phone to talk about Mike Huckabee, we expect he'll explain it was a joke. Surely, he'll assure us that the wisecracking former Arkansas governor was just playing along for a laugh in Mercer's now-iconic Talking To Americans television spots.