Rep. Jackie Speier Talks About her Abortion: 'I'm One of those Women' (Video) 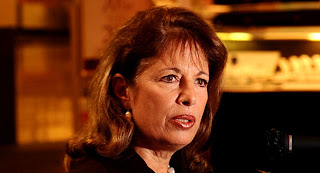 Rep. Jackie Speier (D-CA) spoke up about her own abortion in response to Rep. Chris Smith's (R-NJ) disapproving and graphic description of an abortion procedure practiced by EVIL WOMEN. No doubt, Chris Smith was surprised that people (EVIL WOMEN) like Jackie Speier are permitted on the House Floor.

I don't recall this ever happening before. Rep. Jackie Speier may be the first Congresswoman to discuss her own abortion on the House Floor. Maybe others will follow her example. And how about some of those hypocritical anti choice men fessing up to paying for their girlfriends' and mistresses' abortion?

The House chamber was silenced on Thursday night when California Rep. Jackie Speier (D) revealed that she had to have an abortion. The revelation came as debate on an amendment to defund abortion provider Planned Parenthood neared its third hour. Speier shocked the lower chamber, half-full of lawmakers and staff, still hard at work on a government funding measure for the third straight day.


"That procedure that you talked about was a procedure I endured."
-- Democratic Rep. Jackie Speier
Say Goodbye to Reproductive Health Care, Ladies
Revealing Her Own Abortion, Rep. Speier Criticizes Conservatives For Failing To Empathize With Women