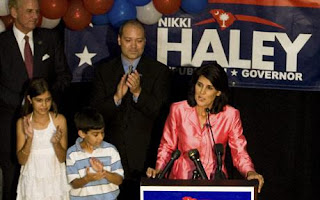 Nikki Haley won the South Carolina runoff last night. She beat her opponent, four term Congressman Rep. Barrett, by a landslide: 65 - 35 percent.
Don't miss the rare photo of the man, her husband, standing, with the children, behind the victorious woman.
Nikki Haley joins Sarah Palin in a remarkable make-over of the face of the Republican Party. Ms. Haley will almost certainly be the first woman to be elected as Governor of South Carolina. How fitting that she will replace the infamous Appalachian trail-hiker Governor Mark Sanford:

Nikki Haley won the Republican nomination for governor of South Carolina on Tuesday, a commanding victory that elevates her to become one of the leading faces of the national Republican Party. . . Last month, Ms. Haley took a dramatic leap in the polls after endorsements and campaign visits from Sarah Palin, the former Alaska governor, and Jenny Sanford, the popular former first lady. She had trailed far behind her three Republican rivals in fund-raising and visibility, but she was strongly embraced by Republican leaders in Washington and touted as one of the party's next leaders.

Politics Feminist News Gender
Posted by egalia at 7:20 AM