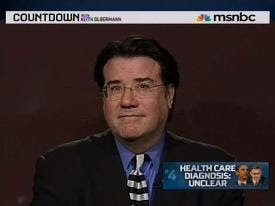 Craig Crawford has left MSNBC. I'm a fan of Crawford's. Scroll down for the video clip of Craig Crawford's famous critique of the frat-boy media for its primary hate-fest coverage that tagged Bill and Hillary Clinton as vile lowlife racist scum. After all this time, I still want to applaud and give Craig Crawford a rousing standing ovation for saying it. What he got was kicked off the MSNBC frat-boy air for gawd only knows how many months. I don't know how he hung with Keith Olbermann as long as he did:
Three months short of my current contract I sent the following to the boss, Phil Griffin: “Phil, Just wanted to give you the heads up that my situation with MSNBC has become so unrewarding for me that I’ve decided to move on." — Craig
Crawford was one of a very few MSNBC analysts who tried to abstain from playing the ridiculously juvenile game of demonizing all political opponents. In other words, he's a grown-up. Try that while being a guest on the Keith Olbermann show! MSNBC has some virtues and many flaws. For many years it was every liberal's dream to have our very own liberal cable news channel. Who knew it would model itself after Fox News?
Crawford left these comments at his blog:
I have never and never will forgive Chris for calling me a racist after the West Virginia primary (the last time I will ever go on air with him). Probably should have resigned then and there, but better late than never.

Can't tell ya how hard this choice was to make. I've had a difficult time with MSNBC since the presidential primaries, should have pulled the trigger long ago. but my scotch-irish blood keeps me loyal long past the bitter end, which has long past, sadly.

I simply could not any longer endure being a cartoon player for lefty games, just gotta move on to higher ground even if there's no oxygen.

He elaborated over at Mediate:

I haven’t felt like a good fit for MSNBC since the presidential campaign, and the hard turn toward point-of-view programming. No particular event brought this on, just my desire to try other outlets and have more fun. As far as Chris is concerned, on Morning Joe after the West Virginia primary he accused me of always defending Clinton and what he claimed to be her racially motivated campaigning. That’s the problem. Trying to be fair became seen as bias in the new thinking over there. But I do wish my many pals at MSNBC nothing but good things.

And he told TV Newser:

So many of my booking calls lately have been for segments bashing Sarah Palin, for instance. I was boring myself, and surely the viewers. . Perhaps I'm not cut out to be a cable cowboy anymore, dunno. Prefer remaining independent and do my own thing for any channel, including MSNBC, that books me. After a dozen years with one channel, I'd rather play the field for a while.


"I have watched the coverage, and I really think the evidence-free bias against the Clintons in the media borders on mental illness. I mean, I think when Dr. Phil gets done with Britney [Spears], he ought to go to Washington and stage an intervention at the National Press Club.. . I mean, we've gotten into a situation where if you try to be fair to the Clintons, if you try to be objective, if you try to say, 'Well, where's the evidence of racism in the Clinton campaign?' you're accused of being a naïve shill for the Clintons. I mean, I think if somebody came out today and said that Bill Clinton -- if the town drunk in Columbia [South Carolina] came out and said, "Bill Clinton last night was poisoning the drinking water in Obama precincts," the media would say, "Ah, there goes Clinton again. You can't trust him."
Craig Crawford
video via Inside Cable News

Politics Liberal News Progressive
Posted by egalia at 12:10 AM