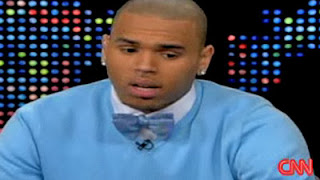 In this video clip from Chris Brown's interview by Larry King, set to air this Wednesday, Brown says he doesn't remember beating the crap out of Rihanna. Now we know why his apology was so late and so lame.
"I'm like, it's crazy to me. I'm like, wow. . I just look at it like, wow. I'm in shock, because that's not who I am as a person…I don't know what to think. It's just like, wow."

When asked about the photo of Rihanna's beaten face:

"When I look at it now, it's just like, wow. I can't believe that that actually happened."


Brown's mom sits by her son's side and tells us that Chris has never been a violent person. Perhaps she also has a memory problem:

However, reports have come out that Brown and Rihanna's relationship was plagued with violence. The couple got in a shoving match in Europe three months prior to the February incident. Also, in January 2009, the couple got into an argument in a car in Barbados, during which Brown exited the vehicle and smashed the driver and passenger side windows.

Brown was sentenced to 5 years of probation and 6 months of community labor, and all for a crime he can't remember.
Misogyny Chris Brown Hate Crime Feminist Politics Gender Terrorism Violence Against Women News
Posted by egalia at 3:16 PM