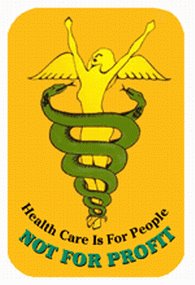 Someone from the Governor's office called me the other day and asked if I would sign a petition of support for our Democratic Governor Phil Bredesen.

I said, no, I can't do that, cause Phil Bredesen cut two hundred thousand people off the healthcare rolls and severely restricted benefits and access for hundreds of thousands more.

Charles and Donna Primm are two more reasons why I won't be voting for Phil Bredesen (D). The elderly couple were found dead with suicide notes explaining that she had severe health problems and neither of them had a dime to spend on her healthcare.

If only Charles and Donna had been Canadians.

It is hereby declared that the primary objective of Canadian health care policy is to protect, promote and restore the physical and mental well-being of residents of Canada and to facilitate reasonable access to health services without financial or other barriers. (Section 3 of the Canadian Health Act)

We'll never know how many people have suffered and died in this state because of Phil Bredesen's money-saving, life-wasting healthcare cuts, but we know too many people have, and continue to, suffer and die because of the unprincipled whiz of a businessman Democrat.

As Mike Huskey asks, in a letter to the editor in today's Tennessean (not online yet, they're slow at the Southern Baptist Times):

Can this state, in good conscience, re-elect the current governor since he has destroyed the previous TennCare system that provided needed aid for thousands?

The key words in Mike's letter are, good conscience. How the hell do you find leaders, Republican or Democrat, with that?

A married couple was found dead, each shot in the head, in a parked car in front of the East Nashville Precinct last night after a possible double suicide, Metro police Detective Matthew Filter said in a statement.

Sgt. Stephen Duncan with the East Precinct found the Inglewood residents, whose names were not released, slumped over and shot in the head in a white Mercury Grand Marquis about 6 p.m. A gun and notes describing recent financial distress because of medical debt were found in the car, said Sgt. Robert Weaver of the East Precinct investigations night shift.

According to the notes Duncan found, the wife had experienced the undisclosed medical problems.

Although the investigation was in its early stages, Filter said police suspected the couple's deaths were the result of a murder-suicide or double suicide. The family has been informed, Filter said, but it had not been determined why the couple came to the East Precinct.

"It was strange. I don't know why they decided to do this here," he said. "I guess they just thought it would be easier this way."

East Precinct detectives have released the names of the married couple found dead in a parked vehicle in front of the East Precinct Thursday night.

Charles M. Primm, 60, and his wife Donna, 58, of 1011 Malquin Drive, were both discovered shot in the head from an apparent double suicide.

Investigators located suicide notes inside the vehicle and at the victim’s residence. The notes detailed Donna Primm’s health problems and the couple’s severe financial debt as the reason the couple mutually agreed to end their lives.

It is unknown at this time why the couple came to the police precinct to complete the apparent double suicide.