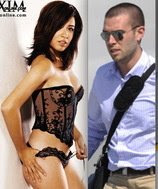 Apparently, famed cardboard groper and Obama speechwriter Jon Favreau has graduated from the cardboard. Now he has a girlfriend who poses in her underwear on the cover of Maxim magazine when she's not working as an assistant to a White House deputy chief of staff. Quite the cast of White House characters. I can hardly wait to see the made for teevee movie.

Sorry, ladies: We're told Jon Favreau, Barack Obama's 27-year-old single speechwriter, now has a girlfriend. With ample clearance. . Favreau has a sweetheart on the inside. A tipster tells us he's seeing Ali Campoverdi, a White House aide who once appeared in her underwear in Maxim magazine.

We're told Campoverdi is an assistant to a White House deputy chief of staff. Previously, she was an intern on the presidential campaign. If you have any further information we'd love to hear from you. (If Campoverdi is going to be around for a while, we might just have to add her to our list of official White House hotties.)