Why Sarah Palin is Good for Feminism 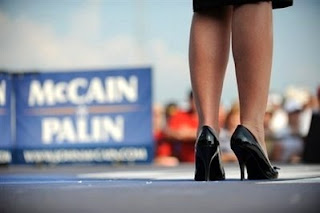 It’s disappointing to see so many people fail to understand, or care about, the fact that Sarah Palin’s historic place on the Republican presidential ticket is good for feminism.

And in a million ways.

Because I celebrate the fact that Republicans are inadvertently helping to break up the male monopoly on power, some decidedly shortsighted (or stressed about the election) folks accuse me of supporting the rightwing.

In my view, it should be glaringly obvious that the feminist goal of transforming sexism into a societal taboo requires getting a critical mass of women, all kinds of women, into positions of power.

Even so, the political pundits, like the pols, continue to be overwhelmingly male. With Hillary Clinton's withdrawal from the race, it seemed likely that the political discourse would soon revert back to the traditionally male cast of characters.

The longterm project of ending the rampant misogyny requires that all kinds of women participate in politics, even Republican women. The Democrats brought this, their worst nightmare, on themselves. They've taken the woman vote for granted long enough. In the future, the Democratic Party will take women voters far more seriously. And that is extremely good for feminism.