Sen. Larry Craig (R) Arrested for Being Lewd in a Men's Bathroom 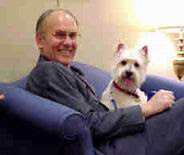 Move over Mark Foley! Remember the alleged gay Senator Larry Craig (R-Idaho)? Last October, Larry Craig was 'outed' by Mike Rogers, the gay activist and blogger at BlogActive, as a closeted gay Republican who works against the interests of the gay community.

Larry Craig has now joined the club of Republican lawmakers caught being lewd in a men's bathroom. And, yeah, Craig faces a reelection bid in 2008.

Sen. Larry Craig (R-Idaho) was arrested in June at a Minnesota airport by a plainclothes police officer investigating lewd conduct complaints in a men's public restroom, according to an arrest report obtained by Roll Call Monday afternoon.

Craig's arrest occurred just after noon on June 11 at Minneapolis-St. Paul International Airport. On Aug. 8, he pleaded guilty to misdemeanor disorderly conduct in the Hennepin County District Court. He paid more than $500 in fines and fees, and a 10-day jail sentence was stayed. He also was given one year of probation with the court that began on Aug. 8. [via Real Clear Politics]

But it was all a terrible misunderstanding: "Because Larry Craig was under the impression that the other gentleman wanted to have anonymous sex with him in an airport bathroom."