Christians to March Against Sexual Revolution in Nashville ('The Call Nashville') 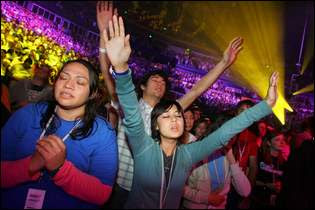 Hundreds of Thousands of Christians (Reportedly) to March Against Sexual Revolution in Gay District and Downtown Nashville on 7-07-07 -- A good day to stay freakin' home!

If you live in Nashville, you'll want to lock your doors and stay inside on Saturday, 'cause the Christians are coming to downtown Nashville, and they are pissed. According to one estimate, there will be 200,000 of them marching on Church Street -- straight through Nashville's gay district and on through downtown Nashville to the Titan's stadium.

For 40 years our nation has been reeling under the influence of the sexual revolution. The fruit has been the disintegrating family unit, divorce skyrocketing, sexual abuse is everywhere, pornography is the norm, and gross perversion, rape and violence ravage our land.

Now is time to reverse the curse and denounce the bondage of the sexual revolution. As we humble ourselves with mass repentance we will stand in the gap for our nation and shift its course from perversion to purity. The Roar of the Righteous will be heard again in our land.

We are calling the Church to Church Street, to repent on behalf of ourselves, the Church, and this nation for tolerating Jezebel and her insidious pornographic plague. It’s no secret that the Church has been paralyzed by sexual immorality and that families are under an onslaught. It’s time to come clean – it’s time for the Bride to be pure and get her voice back.

Gawd help us! I'm not leaving the house until they leave town.

The Nashville Call website says there will be "hundreds of thousands" of them! The good news is that the day they invade Nashville is also the day Al Gore's Live Earth Concerts will be playing on NBC.

More good news is that these particular Christians are pissed at the Republican Party. Of course, they are also pissed at you and me and freakin' everybody else.

According to the website of 'The Call Nashville' - the hotels are sold out in droves. But pity other Nashville businesses; they get to endure the massive disruption while the 200,000 or so Christians promise to fast for the entire day!

Fortunately, the fun starts at 7am, with the marchers set to arrive at the stadium by 10am. But who knows what route will suffer the punishment of their presence after the trasfixed crowd leaves the stadium? Restaurants might be wise to just close it down for the day.

And good freakin' luck to the shops in the gay district, especially Larry Flynt's Hustler store! Can we have some police protection? Larry, you might want to come to Nashville for this one!

You'll be happy to hear that your Christian Tennessee State Legislature blessed this event with an actual resolution.

Not that we live in a theocracy or anything, but who elects these theocratic fools?

The Call Nashville
When: July 7, 2007 – 7am-9am
Where: Begins at Centennial Park Band Shell next to the Parthenon and marches up Church Street, through the heart of the city and into the stadium.
The Call begins at 10am and ends at 10pm. Gates open at 8 am to allow people to get through the lines at security and find their seats.