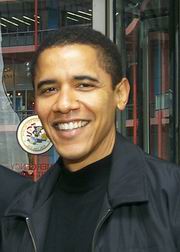 Hillary is not David Geffen’s dreamgirl.

“Whoever is the nominee is going to win, so the stakes are very high,” says Mr. Geffen, the Hollywood mogul and sultan of “Dreamgirls,” as he sits by a crackling fire beneath a Jasper Johns flag and a matched pair of de Koonings in the house that Jack Warner built (which old-time Hollywood stars joked was the house that God would have built). “Not since the Vietnam War has there been this level of disappointment in the behavior of America throughout the world, and I don’t think that another incredibly polarizing figure, no matter how smart she is and no matter how ambitious she is — and God knows, is there anybody more ambitious than Hillary Clinton? — can bring the country together.

“Obama is inspirational, and he’s not from the Bush royal family or the Clinton royal family. Americans are dying every day in Iraq. And I’m tired of hearing James Carville on television.”

Barack Obama has made an entrance in Hollywood unmatched since Scarlett O’Hara swept into the Twelve Oaks barbecue. Instead of the Tarleton twins, the Illinois senator is flirting with the Dreamworks trio: Mr. Geffen, Steven Spielberg and Jeffrey Katzenberg, who gave him a party last night that raised $1.3 million and Hillary’s hackles.

She didn’t stand outside the gates to the Geffen mansion, where glitterati wolfed down Wolfgang Puck savories, singing the Jennifer Hudson protest anthem “And I Am Telling You I’m Not Going.” But she’s not exactly Little Miss Sunshine, either. Hillary loyalists have hissed at defecting donors to remember the good old days of jumping on the Lincoln Bedroom bed.

“Hillary is livid that Obama’s getting the first big fund-raiser here,” one friend of hers said.

Update: Hillary Campaign Blasts Obama Over Maureen Dowd Column -- "If Senator Obama is indeed sincere about his repeated claims to change the tone of our politics, he should immediately denounce these remarks, remove Mr. Geffen from his campaign and return his money. . . While Democrats should engage in a vigorous debate on the issues, there is no place in our party or our politics for the kind of personal insults made by Senator Obama's principal fundraiser."