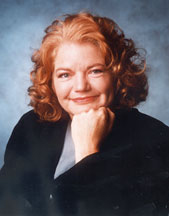 Funny, we were just discussing the question of whether or not the discomforting shock tactics of PETA are necessary.

And here Molly Ivins still can't get a little two-word social commentary on the routine slaughter of some of us animals into the allegedly liberal New York Times. Not even in her obituary!

When Molly Ivins passed away this week, many obits and loving tributes recalled one of her most famous lines – not because it was her greatest or funniest, but because it helped spark her departure from The New York Times.

. . Surely, in swinging 2007, with some of the greyness drained out of the Grey Lady by now, the paper would finally print the phrase in its Ivins obituary? Uh, think again. Didn’t happen. Censored again. The phrase was, still, just too offensive for the Times, which described it this week as “sexually suggestive.”

First, here’s how the Los Angeles Times told the story this week – later published in the Times’ sister publication, The Boston Globe: “She chronicled the mistakes and misdeeds of Texas lawmakers for five years until she was hired away by The New York Times in 1976. She covered New York politics, then became the paper's Rocky Mountain bureau chief, but the match of Ms. Ivins and the Grey Lady of journalism was misbegotten from the get-go. The paper flattened and defoliated her colorful prose….

“The line that ended her New York Times career came in a story about a community chicken-killing festival. Ms. Ivins called the event a ‘gang pluck,’ a choice of words that caused her to be ‘sort of abruptly recalled like a defective automobile and replaced,’ she told Salon.com in 2000.”

Regardless of what's on your plate, surely we can talk about it?

Damn. What else has Molly said that I never got to hear? I need to dig out my unread copy of Molly Ivins Can't Say That, Can She? (Not to brag, but it's autographed.)

"My situation is a solemn one. Life is offered to me on condition of eating beefsteaks. But death is better than cannibalism. My will contains directions for my funeral, which will be followed not by mourning coaches, but by oxen, sheep, flocks of poultry, and a small traveling aquarium of live fish, all wearing white scarfs in honor of the man who perished rather than eat his fellow creatures." ~George Bernard Shaw