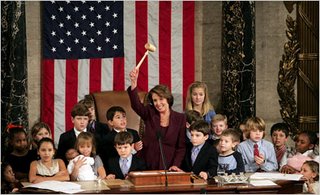 What a photo! God, I love this woman.

Below are snippets of the coverage of the historic day which saw the election of a self-identified feminist as the first woman speaker of the U.S. House of Representatives!

Nancy Pelosi concluded her speech marking the start of her tenure as the first female speaker of the House of Representatives with an altar call. She invited all of the children brought by members to come to the well of the House and touch her new gavel. The children swarmed to the front in their sweater vests and velvet dresses. It was a fitting gesture to mark not only a change in congressional power but in the over 200- year tradition of white male leadership. Acknowledging her own children, Pelosi thanked them for giving her the support to "go from the kitchen to the Congress." At one point Madame Speaker had five grandchildren hanging from her, one an infant, whom it must be said she wielded on her arm with total ease. (Male politicians look so strange when they kiss the obligatory baby; Pelosi looked like she might do tricks with it.) 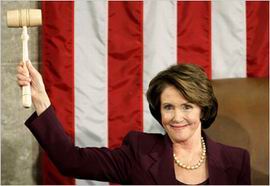 For Pelosi, yesterday's election was not only the culmination of a long climb by women through the ranks of Congress but also the personal triumph of a hard-nosed partisan, a grandmother of six who methodically plotted the Democrats' return to power after more than a decade in the minority. A House floor where Democrats had been marginalized to the point of irrelevance in recent years was alive with handshakes, smiles, hugs and boisterous children on the Democratic side of the aisle. Republicans, once so confident in what many saw as a permanent majority, sat glumly watching the festivities.

As Pelosi entered the chamber before her formal, party-line election, the House erupted in bipartisan applause. Only Rep. Joe L. Barton (R-Tex.), the outgoing chairman of the House Energy and Commerce Committee, remained seated in stony silence. Pelosi's predecessor as speaker, Rep. J. Dennis Hastert (R-Ill.), sat quietly and unobtrusively in the rear of the chamber, except for one brief moment of recognition.

Throughout, the symbolism of Pelosi's triumph for women was center stage.
Outside a brunch Thursday at the Library of Congress, leaders from the National Organization for Women greeted her with a giant congratulation card. The message: Way to Go! 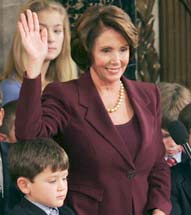 But Ms. Pelosi made it quite clear earlier that her party intends to flex its newly acquired muscle, as she presided over the swearing-in of the leadership of the Congressional Black Caucus, headed by Representative Kendrick Meek of Florida.

“The Democrats are back, and the C.B.C. is in the lead, in the lead!” Ms. Pelosi exulted. Throwing a dart at Republicans, she envisioned “a new direction that is there for all of the people, not just the privileged few,” a direction that “builds and strengthens the middle class.”

And the expected whining from a rightwing blog:

Pelosi is Already Drunk on Power . . .