Morality of Forced Maternity in an Anti-Family Nation 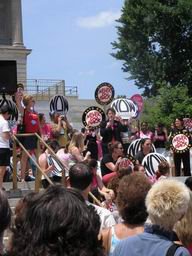 The Supeme Court decision to reconsider the constitutionality of the Partial-Birth Abortion Ban Act combined with the South Dakota legislature's unconstitutional effort to outlaw abortion have moved the issue of abortion to center stage.

Sounding a lot like Hillary Clinton, Newsweek and a host of other mainstream media manage to analyze the morality of abortion without ever touching on the morality of mandating forced motherhood in a nation that flaunts an anti-family, anti-life policy so harsh that it results in 46 million Americans without healthcare and the highest child poverty rate in the developed world.

And the leaders of this nation insist that it is the pro-choice women of America who are morally bankrupt? Hello?

The U.S. fails miserably in keeping up with other nations in the most basic of health measures such as infant mortality, for god's sake. We are one of only six nations that do not mandate paid maternity leave. In America, women are routinely left to raise children on their own without even the aid of minimal child support payments, affordable and safe childcare, or even the family allowances that are so common in the other developed nations. Nothing makes the women of America poor like children, yet elected representatives insist that women should just do the 'morally right' thing by producing hordes of children for the convenience of an anti-family, anti-life nation.

There is nothing "pro-life" about a nation that has the highest child poverty rate in the developed world. If the goal is to persuade American women to give birth to more children, this nation is going to have to join the rest of the developed world and get serious about coughing up a pro-family, pro-life policy.

Excerpt from Newsweek, sounding like Hillary Clinton (who had ONE child):

Though a narrow majority of Americans say they are pro-choice, recent polls show that roughly two out of three favor some restrictions on abortion. The anecdotal evidence is growing that women have moral qualms about any abortion, even if they feel compelled to have one. The pro-life movement has done an effective job of showing that a fetus is not just a "blob of tissue," says Peg Johnston, who runs an abortion clinic in New York state. Her patients now talk about " 'babies' " and " 'killing'," she says. "At first I thought they were picking up the language from [anti-abortion protesters] outside. But then I started really tuning in to my patients, and I realized, 'She really feels that way'."

The language of pro-choice politicians has started to reflect the grass roots. Abortion is a "tragic choice," says Sen. Hillary Clinton. But the pro-abortion-rights groups are still partly in denial. Last month William Saletan of Slate, the online magazine, wrote an op-ed piece in The New York Times that has set off a buzz of controversy. "It's bad to kill a fetus," wrote Saletan. "You can't eliminate the moral question by ignoring it." But Nancy Keenan, the new president of NARAL, throws up her hands at Saletan's characterization of abortion as "bad," and exclaims, There it is again! Judgment!" Frances Kissling, head of Catholics for a Free Choice, is pushing for "more honesty about ambiguity," as she puts it. "There is a deep-seated fear that if you address the moral issues, you're going to lose," says Kissling. "But we're losing anyway. It's only by addressing the moral issues that we'll get some relief on the political questions."

This week Kissling and the Center for American Progress, a liberal think tank, are hosting an unusual sum-mit meeting in Washington between old-line true believers and middle-of-the-roaders. They are unlikely to reach a consensus, but at least they will begin facing important questions about morality and abortion.