Politics, the Church and NBC's 'The Book of Daniel' 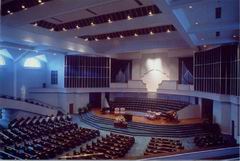 A TGW Exclusive --
Church Threatens NBC Affiliate with: "War with the Church"


By now you’ve heard that Nashville’s NBC affiliate, WSMV-TV, abruptly cancelled its plans to run The Book of Daniel series, thanks in large part to the efforts of the radical rightwing American Family Association.

What you may not have heard is that the politically active Mega Church, Two Rivers Baptist (pictured above), played a significant role in the rightwing Christian effort to bully the small TV station into doing its bidding.

Two Rivers Baptist is the 6,800-member Church that hosted the infamous Justice Sunday II political rally. The rally was broadcast live to congregations across the country with the purpose of inspiring the faithful to become politically active in order to ensure the reign of ultra conservative and Christian Justices on the Supreme Court. Sounding like an eery echo to radical Islamists, Christian and political leaders at Justice Sunday II swore they would use the courts to "bring the rule and reign of the cross."

With Chief Justice Roberts already installed and soon-to-be Justice Alito, it looks like they’ve pulled it off.

Last summer, MSNBC political pundit Chris Mathews broadcast his show, Hardball, live from inside the ostentatious Two Rivers Church. The star of the show was Two Rivers Pastor, Jerry Sutton. If ever there was any doubt about the Church’s role in modern day politics, these events put an end to it.

Reverend Jerry Sutton describes his reaction to The Book of Daniel on the Two Rivers Church website. The Pastor says he watched the entire two-hour episode. He describes it as "a distortion of Christianity," and, "It was slander and blasphemy of the greatest magnitude." Pastor Sutton instructs, "Every person in America who takes his or her faith seriously should be highly offended" - because NBC is taking "nasty shot(s)" at "Christ and the Church."

Now really, can the show possibly portray Christianity in a more offensive light than the likes of Pat Robertson?

The series features an openly gay male character and a lesbian. It is written by a gay screenwriter. There is no doubt that this also offends the Pastor.

I didn’t see the show. Thanks to the vigilance of hyper sensitive Christians like Pastor Sutton and his politically active Mega Church, I won’t get the opportunity to make my own judgement. Since I am not a believer, I am absolutely certain that I would never ever hold the same views as Pastor Sutton. If, as I’ve heard, the series questions and pokes at old time religion, I might enjoy it, because I am, frankly, sick and tired of having Christianity rammed down my throat.

But that is the point, isn’t it? Disbelievers, pagans, subscribers to the theory of evolution, all of us are meant to be silenced.

From the Mega Church website, Pastor Jerry Sutton urges his followers to write letters to both the station and its advertisers. The Pastor provides the list of advertisers and the station contact information. It’s highly likely that he also had the material distributed during church services.

Here is what I recommend you do:
1. Contact NBC’s national viewer relations department and express your concern: 30 Rockefeller Plaza New York, NY 10112, Phone: 212-664-2333.
2. Contact WSMV, Channel 4, in Nashville and ask them not to continue airing this filth.
3. Contact the show’s sponsors and ask them to withdraw their support. Here is a list of last Friday night’s sponsors.

Scroll to the end of this post to see the list of sponsors. Sutton also provides the contact info for WSMV station manager, Elden Hale: 615-383-4444, email: ehale@wsmv.com

But the Pastor of the Mega Church went further. Sutton sent his own letter informing the WSMV-TV station manager that if he failed to follow the dictates of the Church, the wee little TV station would be in for an all out "war with the church."

Pastor Sutton informed the station manager that said "war" would consist of a campaign "to remove the advertising dollars from your station and your network."

Little wonder that station manager Elden Hale, Jr. obediently announced that the series was history. Hale explained to some of us astonished residents of Nashville that our city is "a particularly religiously sensitive city."

Only now does Hale’s explanation make sense to me. My city may be in the Bible Belt, but it is not an ultra conservative city. Kerry carried the day here, the Gay Pride festival attracts more than ten thousand visitors every year, we have a statue of nude dancers in the midst of our city, we have two thriving gay newspapers, and we even have universities, for gawd’s sake.

But Two Rivers Baptist Church is effectively a city all its own. And, face it folks, that city, or the Church is calling the shots. From legislation to TV programming, to the candidates who appear on our ballots, Old Time Religion is having its way. To paraphrase Bushie, if you're not with the Church, the Church is against you.

The godawful truth is: we are in the throes of what has been aptly termed a cold civil war. And in case you haven’t been paying attention, the irrational crazies are winning.

Last Friday night, January 6, 2006, I spent two hours watching your new pilot, "The Book of Daniel." From start to finish, I was offended by the distortion of Christianity. In fact, your program borders on blasphemy. Never in a million years would you have run a program like that on Islam, and yet, for some reason, you felt it perfectly acceptable to air a program which denigrated Christianity. I am writing to express, first of all, my profound concern that you would put on the air such trash, but also to request that you consider running something else in its place.

I have personally talked with several sponsors, one manager of a Chevrolet dealership and a manager of one of the local Kroger’s, and both assured me that their companies had no intention of being sponsors of such trash and will make sure that their names will not be identified as sponsors again.

With all the moral and social concerns in our society, I am absolutely amazed that your network would even consider producing and promoting a series like "The Book of Daniel." I don’t think you want a war with the Church, but if you continue, I can promise you that we will be much more vocal and much more intentional in our attempts to remove the advertising dollars from your station and your network.

Let me get this straight. The objection to this show is that it borders on blasphemy? Can someone please tell me what millennium I am living in?

I just saw where you made the decision to cancel "The Book of Daniel." I want to thank you for being responsive to your constituents. Although the newspaper noted that the show finished first in its time slot, a lot of us watched it because of the pre-publicity information that it would be critical of Christianity. The pre-airing publicity didn’t tell half of the story.

Again, I want to thank you for being responsive to the large Christian constituency here in Nashville.

Yeah, Mr. Elden Hale, thanks for that. And, if I ever want to tune in to a TV station ruled by the Church, I’ll think of you and my local NBC station first.

For info on the radical rightwing American Family Association's campaign against 'The Book of Daniel' (the AFA campaign began before the show aired!), see Pam's House Blend.