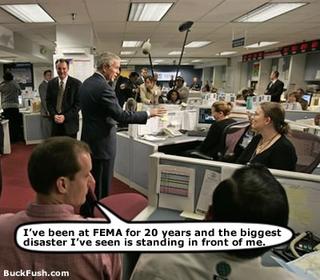 Thanks to Bill in Portland Maine at Kos for compiling these late night jabs at our dear leader:

"Bush is keeping track of Hurricane Rita as it hits his home state of Texas. That's Bush's worst nightmare: an electric chair with no power." --Jay Leno

"Hurricane Rita is supposed to make landfall in Texas, which is good for Barbara Bush because she can insult survivors closer to home." --Bill Maher

"Yesterday President Bush made his fifth visit to the area that received the most damage from Hurricane Katrina. In other words, the White House." --Conan O'Brien

"The president believes the government should be limited not in size, Jon, but in effectiveness. In terms of effectiveness, this is the most limited government we've ever had." --Daily Show correspondent Rob Corddry

"Now here's some sad information coming out of Washington. According to reports, President Bush may be drinking again. And I thought, `Well, why not? He's got everybody else drinking.'" --David Letterman

Hat tip to All Hat and No Cattle for the Photo from Buckfush.