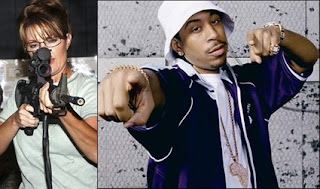 The senate runoff election in Georgia is happening today. If Democratic challenger Jim Martin wins, he will be the 59th Democratic senator and the Dems will have a shot at attaining the magic filibuster proof number of 60.

Georgia is a red state, but runoffs traditionally pull in shockingly low numbers of voters. Anything can happen since everything depends on who comes out to the polls.

Rapper Ludacris campaigned for the Democrats yesterday and in the other corner was rock star Sarah Palin. Alaska Gov. Sarah Palin pulled in record breaking crowds in Georgia yesterday, like a rock star would. Campaigning on behalf of Sen. Saxby Chambliss, she hopes to help the GOP get as many as 41 senate seats.

Bill Clinton, Al Gore and Donna Brazile have all made campaign appearances in Georgia, as have John McCain, Mitt Romney, Mike Huckabee and Rudy Giuliani.