CNN: Is Obama the AntiChrist? 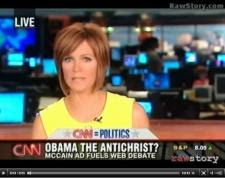 If you were in need of yet more evidence that the raving lunatics are in charge of the national discourse, well here it is. Yes, CNN really and truly devoted precious air time to the riveting question: Is Obama the AntiChrist?

Oh, my aching head. If we weren't stuck inside the borders of a giant insane asylum, CNN would be laughed off the air. But we are. And the crazed fundies who will believe anything -- the ones Obama has been pandering to -- now have a brand new reason to fear and loath the Democratic presumptive nominee. What in the world would we do if CNN wasn't in the business of spreading the insanity? Have an election for grown-ups?

And to all you Obamabots who gleefully used every last vicious media soundbite against Hillary Rodham Clinton, how does it feel?