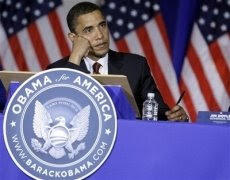 A growing number of longtime Obama supporters are withholding financial and other forms of support for Barack Obama until he comes back to the left. (But was he ever really on the left?) Gee, does this mean all these liberals are really Republicans? Must be!

The number of Obama Supporters Against FISA at BarackaObama.com is now more than 10,000. This group is withholding support until Obama changes his position on FISA.

Bob Ferkik of Democrats.com is asking lefties to "put some of the money you plan to give Obama "in escrow" until he demonstrates progressive leadership on the issues we care about, like warrantless wiretapping. . . We are absolutely not trying to hurt Obama - we'll give him our money at some point. We're just asking for a little R-E-S-P-E-C-T like Aretha Franklin sang about."

The Daily News reports that Glen Greenwald and other progressives are withholding support: Support stops till Barack Obama keeps his word on key issues

JClifford at Irregular Times: If Barack Obama fails to get elected, it will be because of his support for Bush policies like the FISA Amendments Act… and it will be his own fault.

Peking Duck: Can We Still Believe in Obama? -- This is not the Obama who mesmerized us on those jubilant nights early on in the primary as he sailed from victory to victory, the one who was going to stand by principles above all else, never abandoning his moral compass. There is real cause for alarm here.

Taylor Marsh: Can't wait until Obama drops his vice presidential bomb. People like me believe Hillary is the strongest choice, but that's not likely to happen. If recent activities tell us anything, which they do if you've been paying attention, it's likely that Obama's core supporters will be in for another rude awakening.

As for me, I thank the Goddess the Democratic Primary is not over yet. It's just suspended.

Meanwhile, Ralph Nader says he will be on the ballot in at least 45 states.

In Memory of George Carlin: