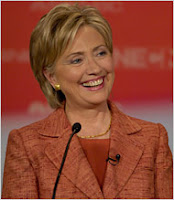 Army Brigadier General Keith Kerr challenged the white male homophobes on the CNN/YouTube debate stage about their position on gays in the military. He phrased the question about 'Don't Ask, Don't Tell' beautifully (see the video below) and he elaborated from the audience.

While the gay veteran was pointing out that doctors, nurses and pilots are routinely discharged for the crime of being gay, members of the GOP audience actually booed. After he finished speaking, the straight white men on the stage said, too bad, we still support discrimination.

Romney the flip-flopper champion of the world got slammed by Anderson Cooper with a quote from Romney's liberal days. Just imagine, in his former life Romney said he "look[ed] forward" to the day when gays could serve. But last night, Romney hemmed and hawed and finally said, that was then, this is now.

But rightwingers have been hard at work since the debate ended. It's only 12:27 a.m., and already they've discovered that the gay veteran is a Hillary supporter! He was even on the steering committee of Veterans for Kerry!

That woman is freakin' everywhere.

The vast leftwing conspiracy wins another one! Somebody give Hillary -- the star of every debate -- a medal. This election is so ovah!


Rightwingers are all over this one folks. The only question remaining in their minds is: Was CNN in on Hillary's plot to plant a Democrat at the GOP debate? You can't make this stuff up.

Back in the reality-based world, Taylor Marsh has: General Punks GOP & CNN

Here's your dose of Rightwing Hysteria: