Did Bush Declare "Secret War" Against Syria and Iran? 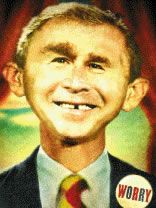 Steve Clemons reports that the madman in the oval office "may have started a new secret, informal war against Syria and Iran without the consent of Congress or any broad discussion with the country."

Washington intelligence, military and foreign policy circles are abuzz today with speculation that the President, yesterday or in recent days, sent a secret Executive Order to the Secretary of Defense and to the Director of the CIA to launch military operations against Syria and Iran. . .

Adding fuel to the speculation is that U.S. forces today raided an Iranian Consulate in Arbil, Iraq and detained five Iranian staff members. Given that Iran showed little deference to the political sanctity of the US Embassy in Tehran 29 years ago, it would be ironic for Iran to hyperventilate much about the raid.

But what is disconcerting is that some are speculating that Bush has decided to heat up military engagement with Iran and Syria -- taking possible action within their borders, not just within Iraq.

Some are suggesting that the Consulate raid may have been designed to try and prompt a military response from Iran -- to generate a casus belli for further American action.

Bush may really have pushed the escalation pedal more than any of us realize.

Maybe that's why Bush looked so scared and creepy during his Surge Speech?

But if you were an egomaniac and you suddenly realized that nobody loved you anymore because you were losing a war, you might imagine that starting a new war could get you some of that Harriet Miers style love and adoration back. If you can't kill the Evil People in Iraq, maybe you can 'take 'em out' in Iran.

Apparently, Joe Biden is worried. Biden warned Rice yesterday that if Bush were to attack Iran without first going to Congress, the madman would spark a major constitutional crisis (another one).

God help us. If anyone can start World War III, the madman can.

via Discourse.net and Alternate Brain has more on the U.S. raid on the Iranian Consulate.