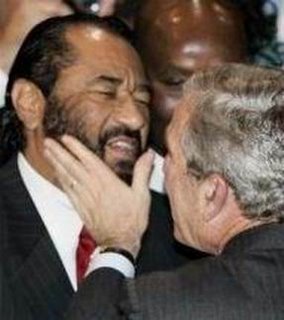 Here's pResident Bush at the NAACP Convention laying his lily white hands on the face of Congressman Al Green (D-TX), former lawyer and president of the Houston NAACP.

--The trait of displaying arrogance by patronizing those considered inferior

--A communication that indicates lack of respect by patronizing the recipient

"Mr. Bush repeatedly referred to the group as the N-A-A-C-P, attracting some notice from those who use the more traditional pronunciation of N-double-A-C-P."

You knew the lily white fool couldn't attend the NAACP Convention without putting blacks in their 'place.' And how is that different from the pResident's five-year boycott of the nation's largest civil rights organization?

Bush's speech was received with more politeness than it deserved.

"[H]is 35-minute talk drew audible sighs and long stretches of silent disagreement and head-shaking from the audience of thousands packed into the Washington Convention Center."

There were boos, and a number of outbursts, some attendees were removed. The White House transcript refers to the disruptions as 'applause' or ignores them altogether.

The pResident used his speech to promote a tax break for Paris Hilton, or the repeal of the Estate Tax, a tax break that would benefit approximately 59 African Americans. (Video )

The Commanding Fool had much to say in the ludicrous vein of truthiness, such as:

"I come from a family committed to civil rights. My faith tells me that we are all children of God, equally loved, equally cherished, equally entitled to the rights he grants us all."