Sixteen Pro Gay Marriage Billboards Will Go Up In Nashville, Tennessee - In the Month of June - And We Hope They Put One Up on Billie Frist's Street! 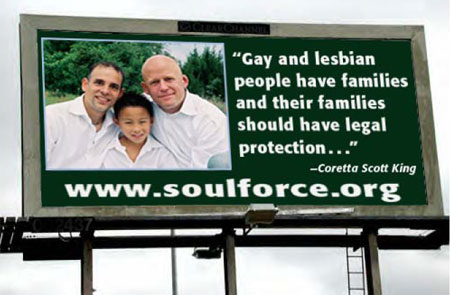 Here's the full quote from Coretta Scott King (see our cool shirt that features a portion of this quote):

"Gay and lesbian people have families, and their families should have legal protections, whether by marriage or civil union. A constitutional amendment banning same-sex marriages is a form of gay bashing, and it would do nothing at all to protect traditional marriages." --Coretta Scott King

For more on the battle in the states and the Tennessee Hate Amendment, aka Amendment 1, see this TGW post: Who's Missing in Action in the Gay Marriage War?